Spontaneously yesterday, while driving home from The Wiggles show:

“Mama! I’m going to take a photo with Santa tomorrow!”

What now? I had to double check with baby girl. But she assured me what I had heard was true. She was happy, didn’t appear to be deliriously tired (though spent she was) and didn’t follow her remark with ‘only joking!’

She appeared to actually mean it.

It’s been 3 years since she had a visit with Santa. The first one, well she kind of had no choice. She was only 4 months old, and I popped her into his hands as she stared at the camera awkwardly with this odd expression on her face.

Maybe she pooped from fear or, I don’t know… thought Mum where the hell are you leaving me???

For her second Christmas she was a year and 4 months. I lined up with her for about 30 minutes, and as it soon became our turn and I walked up to him, she clutched at me and had a panic-fest.

We managed a photo where I sat beside him with her in my arms. The snap shot showed a serious face on her, whereas the other 17 probably had a squirmy, horrified, ‘get-me-out-of-here’ expression.

My dreams of having a Santa photo with her for every Christmas were slowly dashed. For the next 3 years, she totally refused him.

She didn’t refuse Christmas though! No siree! She accepted the carols, trees, decorations and ALL the presents whole-heartedly, even those from Santa!

Just no close-ups of the bearded man, please.

Today, she kept repeating herself. “I’m going to take a photo with Santa!”

So we had to test it out of course. 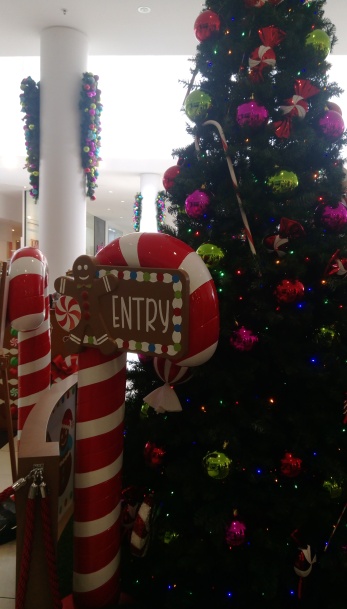 We took her to a nearby shopping centre. She held back a little, and went from wanting to have a solo photo with him, to making us join in on the photographic festive fun…

But WE DID IT.

I am bloody rapt. And timely it is, that last night she received an early Christmas present from some friends, who gave her as one of her pressies, the book ‘Twas The Night Before Christmas.’

“He was chubby and plump,

And I laughed when I saw him,

in spite of myself!

A wink of his eye

and a twist of his head,

I had nothing to dread.” 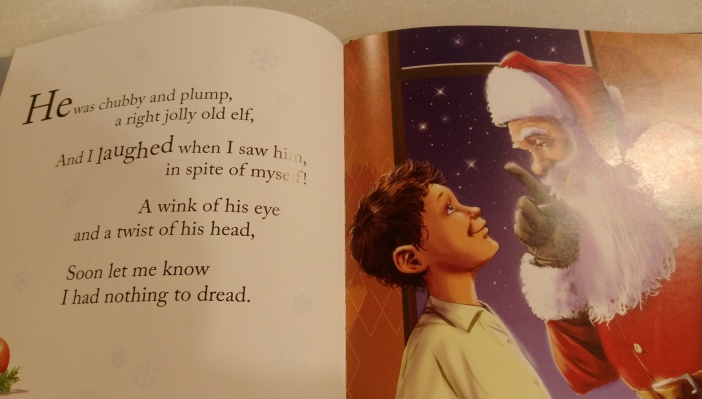 Baby girl sure felt that today, I am sure of it. ♥

Quickie book review #2 Amelia in all of us