It’s what Hubbie yells when a great song comes on the radio.

But today it was me getting excited by the music. We had just been Christmas shopping, and our efforts had been great… we got a lot of stuff including baby girl’s pressies, which was timely seeing as she was at school and had NO IDEA.

On a high from being so Christmas productive, I was happy to hear a song come on the radio, and I immediately turned it up.

“Best movie ending ever,” I said to Hubbie excitedly. “How great is the climax? He comes back after being rejected from the dance company, rejected by her Dad, and he rebels against it ALL, takes her hand, on-stage, and brings the house down as they start to dance.”

“Then the bosses realises,” I still rambled, “‘hey, the holiday-ers actually like this stuff,’ and her Dad goes ‘oh I was wrong about him,’ and it is just sooooo satisfying!”

What movie am I talking about? You should know by now.

Time of my Life, from the ‘Dirty Dancing’ soundtrack.

As if that wasn’t enough to get me happy… as soon as it ended, another great song.

I turned the volume up really high. The max I usually have it on is about 16, maybe 17 or 18 if I’m really excited and driving down the freeway on a hot night with the windows open.

Today I turned it up to 20. Hubbie thought the speakers might burst.

But you know, all great songs MUST be played really loud. Like this one:

INXS’ Don’t Change. I absolutely love this song. I love the cyclical 80s film clip. I love the way Michael Hutchence dances. I love the band’s youthfulness and open disregard for structure and rules. I love the time it encapsulates, but most of all I love how it’s just a really awesome song and has some great words which you should learn and sing along to too…

Things have been dark for too long

Don’t change for you

Don’t change a thing for me…”

I caught a moment on camera as the sun went down tonight.

If you have a child that wants to help you do anything, you can imagine what the above would be like… much less what it’d be like when a HOSE is involved.

It was all well and good for me as I was taking a momentary pause and snapping away at them… but Hubbie turned to me, mid-snap, and said “I have just gained 10 grey hairs.”

After all of the shared soapy sponging of car, and shared washing of the car, baby girl pulsing water from the hose in the air like a gazillion times, and then deciding to water ALL the plants in the front yard 3 times each, she then decided she didn’t want to give the hose back.

Hubbie stood there telling her somewhat calmly that she had to give it back.

Because I knew, in no time at all this would be a funny story. It would be one of those things that we could look back on fondly and say “remember when she would hog the hose?”

Only we wouldn’t have to wait ’til next year, next month or next week…

Foresight told me that it was only a matter of a change of scenery.

I took a final pic that showed baby girl complying – 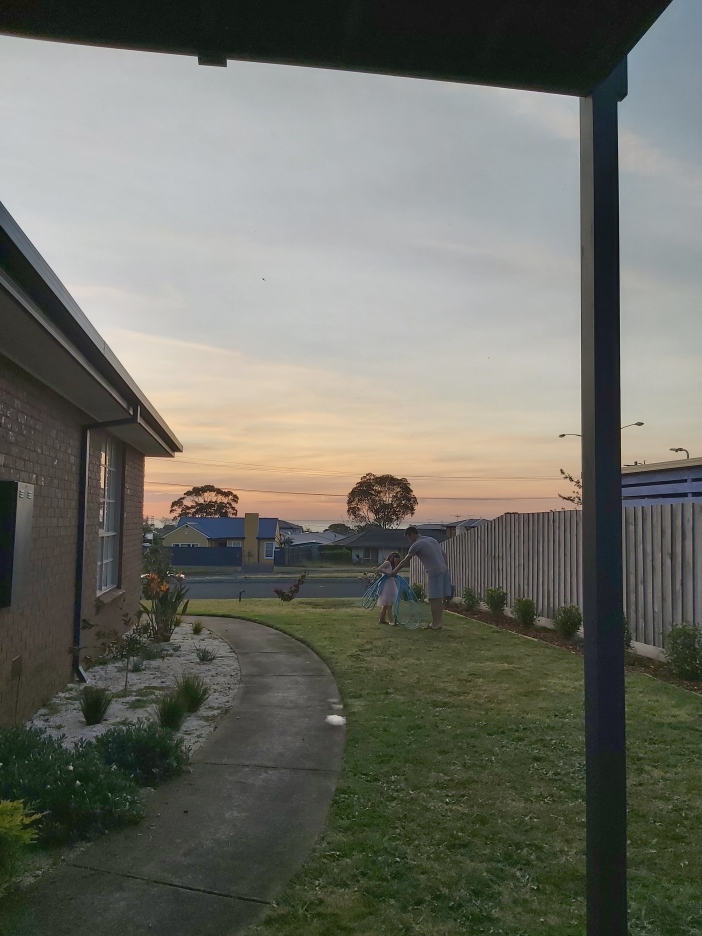 Happy for once, that despite all my positivity, it was him, and not ME.

… Melbourne weather gave to me –

A sunny day to open the car windows!

This is a deal in the Southern hemisphere. I was driving along today, and look, look, check out my evidence: 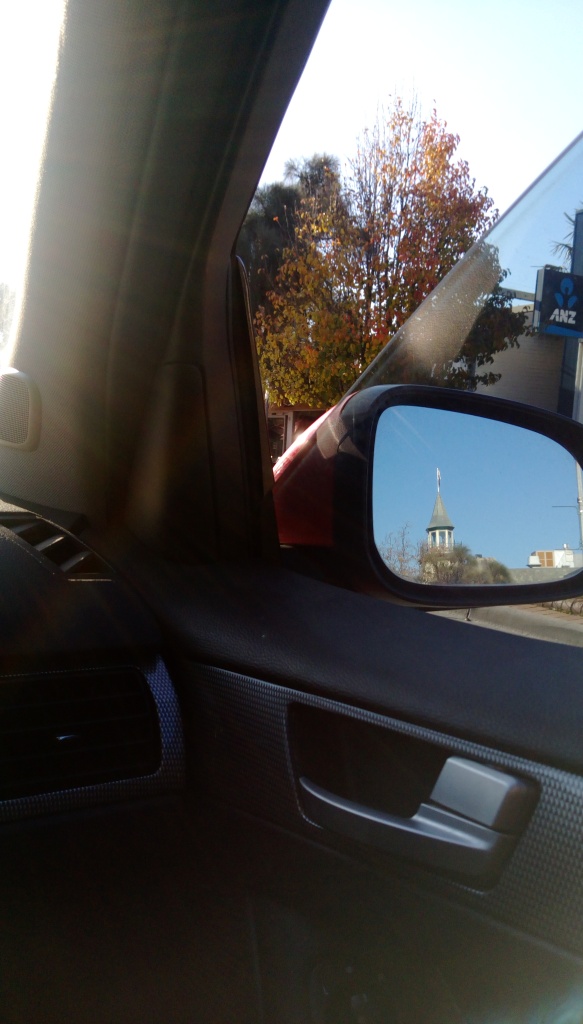 It was warm in the car. Squintingly sunny out.

Sure, we might be in the coldest months of the year… but then hope comes along, in the form of rays of sunshine.

I found myself without car today.

I had to leave my car at an auto electrician’s this morning after school drop off, and subsequently had no quick and reliable mode of transport to get me home.

It was a great walk as it was fresh and I warmed up quickly. It took me 27 minutes from start to my front door, and really it would have been about 20 if I hadn’t made a cheeky detour, and then spent some of my time slowing down to take photos of my goodies. 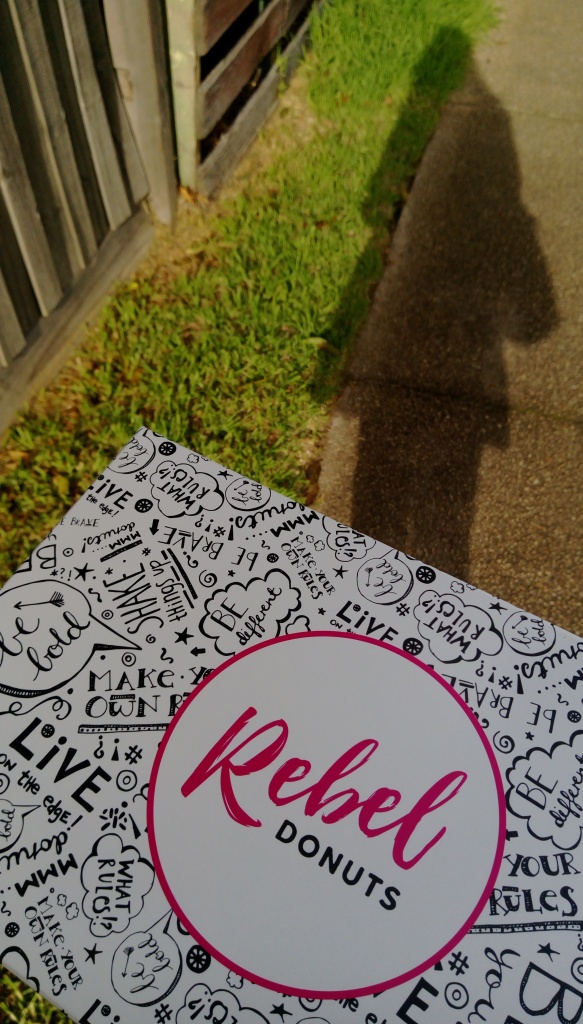 LOL. It is all about BALANCE.

Reward yourself (as if it were my choice) with doughnuts.

Another drive home from being out, and another philosophical D&M. 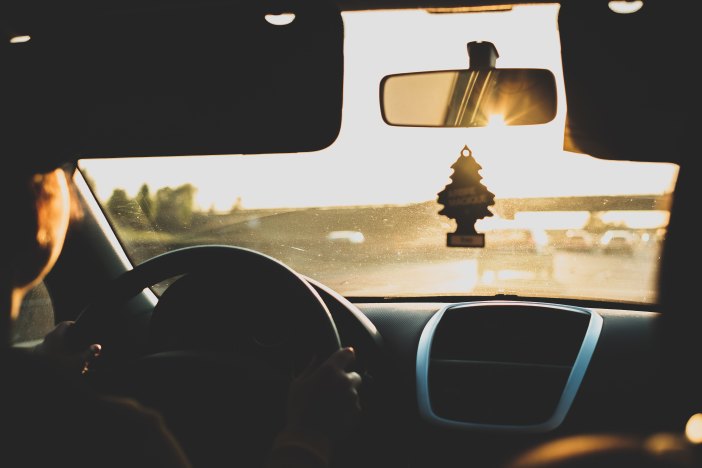 Photo by Luigi Manga on Unsplash

The ingredients for this baked matter that seems to happen almost on a weekly basis now?

A dash of a day of drinking

A heavy sprinkle of a long drive home

And almost a necessity, 1 full cup of a sleeping baby girl in the back seat.

“Imagine Mister F.” Hubbie is giving me an example on his latest ‘thing.’

“Mister F is so scared when he hears our heavy footsteps around the house, or we close a door suddenly… imagine what he went through before coming to us to feel and act like that.”

I pause. “Yeah but Mister F is not attacking me is he? It’s a lot easier to help someone that is scared and isn’t out to get you… but take someone who is having a go at you, and how likely are you to want to help them out of love and care? How easy is it then?”

Clearly, we are not in Kansas anymore Toto, just as we clearly are not solely talking about our cat’s fear of our footsteps.

We are talking about something else entirely.

And in this scenario…. he is being the peacekeeper. The lover. The diffuser.

And meanwhile, I am being the fighter. Throwing Karma back in people’s faces. Going all “GRRR, ARGH!”

We are on polar opposites of this discussion.

As we drive, it literally feels like I am ripping my hair out. It drives me insane that we are on these opposite ends, and still, I understand where he is coming from, I see the peace inherent in adopting such an attitude…

I just can’t get there, myself, personally… YET.

Because I want to, just as much as I don’t want to, and this is where the battle lies. The battle with making people pay, making them hurt as much as they have hurt you… yeah sure, very ‘un-gratitude like’ for me, but some people just push my buttons, and unfortunately I can’t just press a special red button and expel them from the earth’s atmosphere. So yeah. That’s me in a really RAW nutshell.

But I listen to him. I imagine the scenarios. And though it shits me to no end, I still enjoy these talks. These debates. These to’s, and fro’s.

These talks that make us open our eyes, better ourselves, and want something more.

All when we are driving home in the car. Who said long drives were boring?

In an aside… what do YOU think?

Can you see yourself helping someone who has hindered you and hurt you? Who has failed to say sorry?

Can you move past that, forget it all, and treat them, well? With no recognition of the hurt that has passed?

Even if you feel the respect they owe to you, is all but gone?

Can you be the first to reach out and help them, when they were the first with the right-hand blow?

We bought a new piece of furniture today. 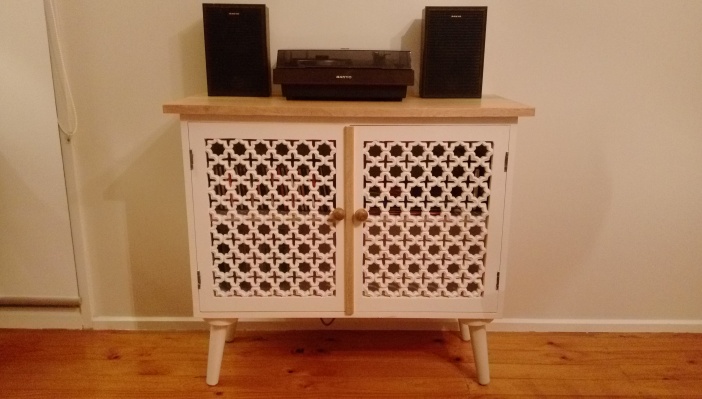 Just as well it has fit in nicely housing some old records, CDs and the whole reason for its being, a place for Hubbie’s old inherited record player to sit on.

We were in the car park of the shopping centre for a good 20 minutes, trying to work out how to fit the thing into the boot, back seat, front seat of the car… and only when a family passing us went by and the Dad figure offered to help out Hubbie, did we manage to properly get the thing in.

It looks even better amidst our room than in this isolated photo. We realised once we put it in there that our lounge room is slowly taking on a bit of a boho-coastal theme…

And ain’t it lovely when things are beginning to look less living-out-of-a-box, and more, check-out-the-room-in-that-catalogue… 🙂

I can’t blame him. It takes me away from him, baby girl, and their bedtime routines… and when I have to pull away from them in the driveway, waving to their sweet faces and knowing I won’t see them again ’til the next day… it’s hard.

A couple of little things make it ok though.

Very few things I might add. Like the obvious one – starting work late, means I get up late, right?

Right. Plus one point.

The other point is dependent on the season, as it occurs only in Summer, and is a little game I play on hot nights…

And no, I ain’t acting like no Fast and The Furious character as I head on home.

But I am using the freeways.

But you should really make sure there are no cars around.

You are scratching your head, aren’t you?

You’ll never guess, which is why I am here to tell you.

I love throwing my hand out of the window.

It might sound super simple and not very unique at all, but trust me, it’s all in the way you do it.

Take tonight for example. It was warm, not just after a hot day, but what has been an uncharacteristic spate of hot days.

I saw the signs. I was ready.

I put my hand out the window, which was all the way down.

I held it at a steady angle as the wind pushed against it. I resisted the force of the wind ever so slightly – sometimes instead of keeping it there, I slowly push my hand forward against the wind tunnel blowing into it –

And then suddenly, I let my hand go slack.

As I relaxed it, it flew back with the force of the wind…

And then I did it all over again.

I know, you think I am crazy. It’s something I would suggest you don’t do when there are other cars around! And you can just as easily do it as a passenger. At my usual pre-midnight hour when I am driving home from a late shift, there are almost no other cars around.

Just me and my car, and a hand wildly flapping out the window.

I find something truly calming about surrendering yourself to Mother Nature, holding your hand up to fight it, but then abruptly, letting go.

Letting go of the unseen forces in life.

Completely surrendering to the process around us.

And flowing with the wind, as it were… at 100 kilometres an hour.

Hot night and all, you’ll draw your hand back into the car chilled to a crisp.

You will have gained more than just a point 😉 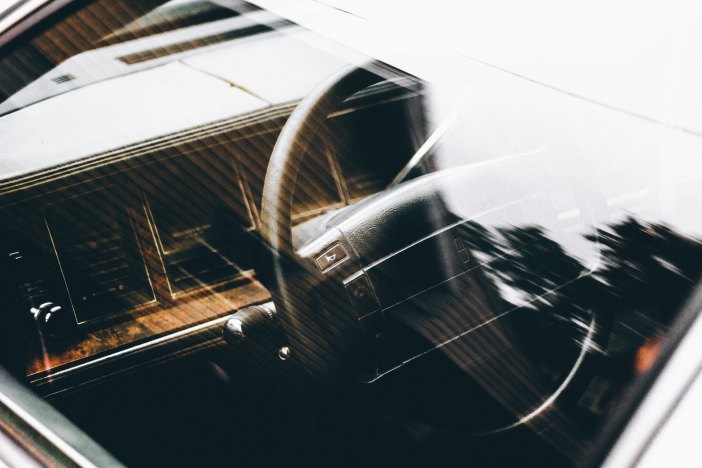 Photo by Ryan Graybill on Unsplash