I love my sleep socks.

What the hell are sleep socks?

Well, they are socks specifically for the purpose of sleeping in them. Think fluffy, long, super comfy and too thick to wear with regular shoes…

But I don’t really sleep with them.

Sure I end up in bed with them on MANY a night… but during the night all too often I find myself kicking them off in my dreams.

I wear them all around the house on cold nights. Think of them as my Winter accompaniment…

Only we are in Melbourne peeps, and we all know Winter can happen, even on December 25th…

It has been soooo cold lately. Tonight I was feeling chilly and worn out, and just as the heater went on (I know, it’s Spring – hangs head in shame) so too did my sleep socks.

I have like, 6 pairs. Super fluffy ones for those Antarctic nights in Winter… a couple of basic ones in different colours that are kind of like, mid-range in warmth but still totally do the job… and then I have my long ones. 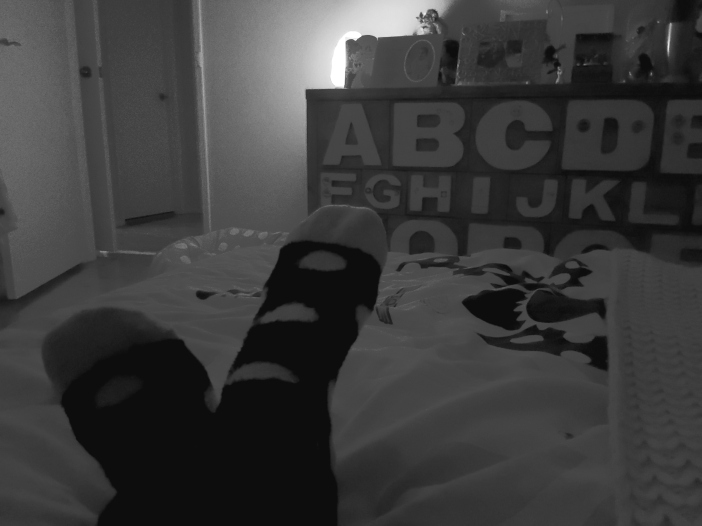 This is me with my feet up as baby girl falls asleep. These socks are specifically for when it is colder than normal, but not that freezing that I need to throw on a Winter coat or anything.

I bloody love my sleep socks. And living where I do, I can be assured they come in handy, ALL year round.

If there is ever a good time to get a cold… (usually, there isn’t)

My cold happened to come at the right time.

If pulled out its full force today, mid-week. Sure it meant I had to pull a sickie. But what it also meant was that

b) It’s Hubbie’s day off, so he took to a lot of the house duties (i.e. looking after me, making me tea, dinner…)

c) It was actually good having both my loves at home. It can be terribly depressing and boring when you are sick and just napping on the couch all day. But having people to make you laugh (and poke their face in yours to see how you’re going, i.e. baby girl!) can be the little light in your otherwise bleak day.

And in my case, my bleak, cold and windy day.

Ugh. Sick in Summer? This is unheard of. You know I had the heater on today?

No wonder I’m sick. Melbourne Weather go in a corner and have a think about what you’ve done, go on…

We need the sunshine back.

This Winter is dragging on. I thought a saw some relief days ago, but just as quickly it has vanished.

The days are long, dark, cold and windy. The heater is our only respite.

My child chooses to argue with me relentlessly, and I respond over-emotionally – I don’t know if it is the after-affects of the lunar eclipse that is wrecking havoc in our worlds, but times are trying.

I try to look up, but when I am reminded of repeated failure, I feel like that is ALL I know. How do you feel good when what you experience is anything but?

The slimmest of lights has me wondering. It has me with little Hopes.

My sister once owned a clock that read

“The best times and worst times have one thing in common… they never last forever.”

It’s one of those sayings that have left a forever imprint on me.

Because it’s a sentiment that lifts you up amidst times of hardship, reminding you that something good is around the corner… and it keeps you humble when you are as high as a kite, riding on the coat-tails of life and feeling the love and adoration of the world at your feet.

What goes down, must come up… and vice versa.

And just this afternoon, I noticed that it was lighter outside when baby girl finished with her usual Monday afternoon swimming lesson.

We leave at the same time each week, but today it was lighter.

Well, maybe things are turning around the corner after all.

The darkness is leaving, and making room for the Light.

I was at a loss to creatively find something new to be grateful for.

Baby girl having a good day at kinder? It’s been done.

Happy to have a working heater on such a cold day? Done.

Happy we vegged on the couch tonight with takeaway? Also done.

Happy I had some wine? Done done done.

I had gotten calls concerning appointments and jobs to be done over the next week – this gave me satisfaction, but the strength to write about them in a creative manner (it’s not just stating the gratitude, it’s also finding the creative drive to make a story out of it) well that focus I needed was GONE.

Baby girl and Hubbie made me laugh countless times, and we hugged and complimented Hubbie on how much better he looked without his beard – that has also been done.

Hell, I’m even feeling better regarding my cold – and that too has also been done.

And as I sat there later this evening, realising all the things I was grateful for had already been expressed before… it dawned on me that I had just made a brand new list, and this new list had never been done before.

So suddenly, I was grateful for it all 🙂

On the 7th day of Winter, the snowman gave to me…

My first cold for the season!

Sure it is a tad early to be getting all Christmas in July jovial, but apparently it ain’t early at all to be copping colds and flus from every direction I turn.

It is inescapable, really. And all the while, it is so easy to fall into the whinging and crying trap, the ‘woe is me’ and ‘I hate Winter fan club!’ (I have a list to counter that!)

There are people who are really sick. I was reminded from different sources today that life is not fair, and heard repeatedly of death and serious illness and misfortune. I also received a phone call from the children with cancer charity, asking me to purchase some raffle tickets off of them. I humbly accepted.

And while I have felt worse for wear, I actually have it good. I have a roof over my head. I have heating at the touch of a finger. I have an electric kettle that boils water for my steaming lemon, honey and ginger teas, a stove for warming up milk for hot chocolates when the teas becomes mundane, and… I have blankets.

I lay down this afternoon on the couch, and baby girl came right on over to promptly cover me with the throw. She then found some more blankets from her bedroom, layered me in those, before saying with an adorable smile “Mama me look after you to get better,” before turning on her heel and leaving me to… recuperate?

What? Was this legit? I relished the feeling of peace and calm… for 2 minutes.

She came back, adamant that she was going to lie down beside me on the couch, and I shuffled over, getting squashed against the back of it. I lay there like an awkward sardine in a can, one hand outstretched over me, the other on her, as I drifted to and from sleep, both the TV in the background and the YouTube videos she was watching of kids playing with barbie dolls, drifting over to wake me up every so often.

I was awkward, I was sick, and I wasn’t really at peace. But I’d take this version of ‘sick’ any day.

It happened a few nights ago, and today again, the same thing.

We were feeling bad, for wanting to put the heater on.

Why, you ask? Because it’s Spring. We should have the doors open ’til 5pm until the seasonal fresh air wafts on through at which point we close up the house. The sunnier weather should seep through the windows and comfort our home. The increased daylight savings should also add to the overall light-filled and jovial nature of our household.

On average October is a wet month, and so in amongst our starting-sunny days, the rain also comes WITH the cold.

You know those memories you have growing up, when you were just a child living with your parents, and there were days where you were cold, but your parents were like

“I’m cleaning the house, we need some fresh air.”

That from your Mum, and then your Dad didn’t help you much either, as he had been out in the gardening sun, tending to his vegetable patch, and had no need for a heater either.

“Here, I’ll give you a heater,” he would say as he handed you a garden rake.

Hubbie and I remembered this all in amusement as we were feeling bad for wanting to put the heater on in mid-October. And then he was like “hey, we’re in charge here.”

“We make the rules.”

“Yeah,” I started encouragingly. “We do!”

And just as he put the heater on we high-fived each other.

Damn straight we make the rules.

And just like that, a simple act of gratitude for the day was born.

The ability to put the heater on when we damn well liked.

And as much as people whinge and bitch and moan about the bills, responsibilities, chores and routine of adulthood, can we just stop for a minute and remember that as adults, we get to make rules?

WE GET TO MAKE THE RULES.

Photo by Cathal Mac an Bheatha on Unsplash

The new ducted heating is here.

The pain is OVER. We have gone all high-tech and with the times with this beauty

It regulates temperature, and even has programmable timeslots so that you can have the heater come on at a pre-determined time… un-fucking-believable.

Just like when my new car had a 6 stack CD player, I am soooo behind in the times.

Our old heater, both here and at our old place, was some 80s-90s contraption, where you had to pull the lever across to the desired temperature of 20+ ‘something,’ but even that ‘set temperature’ was questionable at times.

Tonight, it got hot. Like really hot. This is right on time, since my Dad told me the weekend ahead is set to expect some major Winter-y blasts.

And just for the record, when I was freezing my ass off in the house yesterday as the tradies were in the midst of installing new said-heater? Yeah, well, coldest August day for DECADES.

Still, the icy blasts that will set upon us are timely, since we now have heating, bitches. Take that Winter, mwa ha ha.

So toasty and grateful right now 🙂