It’s a lot nicer when you don’t expect anything, and then the opposite occurs.

Something. We were happily bound to our home for the day, Sunday, the first day of Spring (yippee!) and also, Father’s Day.

Baby girl had happily helped her Dad open up his presents after our late morning breakfast, still on a high from the night before yet feeling the lack of sleep, when I got word, that our quiet day might be different.

But then I heard my Mum and Dad were going to my sister’s place for a quick visit, and so then we might as well pop on by…

And what started as a very non-expectant day, had us around a table talking, laughing, and then watching the rain pour down later when the clouds decided to merge overhead.

It didn’t affect the sunset though. Just as I had been longing for Winter to be over, just as quickly it came to an end… and this seems to happen every year. June, July and the start of August feel so long, then mine and baby girl’s birthday passes and it no time – BANG!

And so the message really is… don’t expect anything. Things are that much sweeter when you think of not much at all…

I’ve been to a couple, and in conjunction with my sister, thrown a few too. But, it had been a while. Until tonight.

The child totally comes out of you when you are standing there with a party popper, hiding around a door with 20 other people and everyone is urging, “shush!”

Then the birthday person enters the room, and – ”SURPRISE!”

It was a fabulous Saturday night, and a reminder once again that we are never too old to have fun, be kid-like, and take joy in the simple things…

No. I am NOT trying to say ‘Patricia’ as Google insists I am as I name check the term. But even so as it fails to come up in search engines, Hubbie insists it is a legitimate Macedonian term.

The day after the party. This comes up time and time again with Hubbie…

Basically it means, “the day after the party.” The event of getting together once again, with loved ones, to enjoy and be merry, and of course what else…?

He informed my sis and bro-in-law well in advance, early in the night last night of his paterica intentions… and they being the loving and obliging family they are, smiled and graciously said “yes.”

So guess where we were this afternoon, driving 24 hours later exactly as we were doing yesterday when we were going to a fabulously themed Gatsby party?

To sis and bro-in-laws house…

We ate and we drank. We went through the night, photos, stories, events. We laughed and we reminisced.

It was all wonderful, warming and happy, and very importantly I think, full circle. In the craziness of it all last night, we had had tonnes of fun…

but then we also had to reflect and talk about the FUN.

And that creates more fun. 🙂

Spending time with family the day after a party? Why, I think that is about the best tradition ever.

I entered the laundry today.

I was moved even.

It was about the Phalaenopsis plant. Rather, to you and me and most Tom, Dick and Nancy’s, the orchid. MY orchid. The plant that had been gifted to us when baby girl was born, the plant I had kept alive… until recently.

I am honestly not sure if it has bloomed since we moved house. Last summer, despite it being next to a window, I don’t recall seeing it blossom once, NOT ONCE… it soon moved to a less prominent position, but still by a window, and still facing the same side of the house as it was before… only it was in a different room. The laundry.

I was hopeful for so long. This plant held ties with baby girl’s arrival. Sure, it’s miraculous to keep these things growing beyond a few years. Plants die, ndoor potted ones more so… I get it.

But this one I COULD NOT LET GO OF.

I watered it. Gave it food. Trimmed some dead leaves and branches from it. With no change and the soil becoming more like sand than dirt, I started to contemplate throwing it away.

Again… I just couldn’t. I left it there in the laundry, facing the window, with dust settling on the leaves… thinking one day, I would do something with it.

I just didn’t know what.

So to walk in today and find this…

What? My orchid was alive? Reborn from brittle soil when I least expected it, its seed lying dormant for the longest time, waiting, just waiting, for the right combination of circumstances to spring forth…

I honestly, clapped with glee. Got teary. I am so glad I didn’t give up.

You all know what this means. I may not throw out a plant now, NEVER EVER EVER.

Because you never know if a seed of hope is lying around somewhere, just waiting.

I wasn’t only preoccupied with thoughts of navy navy navy.

I had something else on my mind as we bought a whole lot of stuff for baby girl’s imminent primary school start next week.

The shopping outings during the week, hand in hand.

Deciding whether it is rice, or a happy meal that day?

Talking about just “one more really small toy” that she would like to get.

I told her I had a surprise for her as I took her to Twisted Sista. She screamed out loud, no hesitation as she saw the extravagantly twisted ice creams with lavish and brightly coloured toppings through the glass display.

I love how she was sooo excited. Her happiness completely unrestrained.

Baby girl, take your time growing up. There is plenty of time for everything.

I am happy for her to act so childlike, because she is after all, a child. My child, growing up, and heading off into school in 5 days time.

I savoured the moment as we sat at the table, slurping our ice creams, and saying “it’s good.”

It was good in every way. ♥

Well. What an iconic way to spend Christmas Eve in Australia. 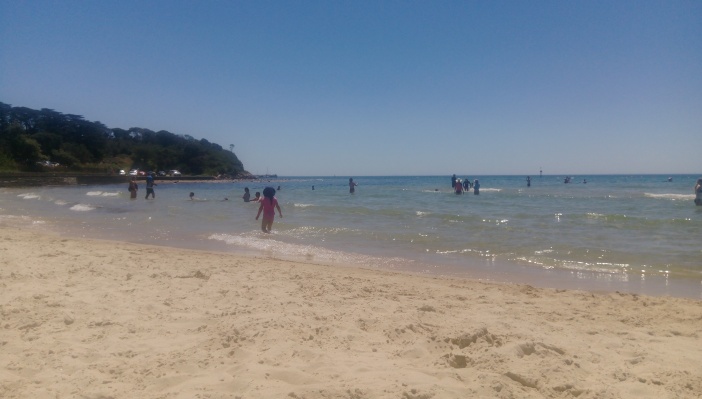 Even so, it wouldn’t have happened in our old house. Back then we would have had to plan and organise a time and day where we were all free, packed up about 7 bags, a fridge, a heap of beach toys and tents and chairs, because you know, pack the kitchen sink and all when you’re already making such a drive… and that would have happened, oh, maybe 3 times in one Summer, if we were lucky to manoeuvre our schedules that way.

Today, on the eve of the busiest and fullest of family days of the year, I headed on down to one of our fave local beaches with baby girl.

I was applying sunscreen on me and her as I heard my phone notify me of a message.

It was Hubbie. He was home early from work!

Damn it! We had just missed each other, I mean, he could have come with…

I left it as a surprise, preferring to see baby girl’s startled face at the sight of him, than to ruin it earlier and tell her he was coming.

Everything was beautiful. There weren’t too many people around, and yet already my radar is fine-tuned to spot tourists! The water was sublime, that perfect stroll-right-in temperature.

There was a slight breeze taking the edge off of the beating sun.

And it was Christmas Eve!

It still amazes me that two years on from our move, only now we are getting more of a chance to do the things we so wanted to do frequently, when we first Sea Changed.

It was the best way to head into the holiday season, and head into Christmas.

I am on the other side of town, driving my car after having had its regular service, back to my parents house.

I have a jacket on… but it is warm. There is no heater on.

In fact, the window is open.

I can’t remember if the mechanic left it open after finishing with it, or whether I in fact did it. But all I can tell you, in that warm car on today the last Friday of July, the open window was INVITING. I can even add, that the sun was on my face as I jumped onto the freeway, and I wondered –

“could I get sunburnt?”

Get out of town! it is July 27 folks, this is insanity!

Can you see the suns rays just BURSTING down through the open window. You can just feel the warmth.

I know I am creating a yearly theme here. But seriously, this time around I am 4 days early. So 2018 wins.

Shucks you under-achiever July… you may have me reformed on your Winter-y reputation, just yet…