My girl got an award today.

My heart was bursting. IS. Not only did she get this award, but she was the first one in her class, for this new year, to receive a shooting star. 🌠

We always say she is a superstar. 🤩

Bonding with family is one of those things you can never get enough of.

Whether it’s listening to some music together, having a healthy debate, a light-hearted laugh, a sincere d&m, or even being able to share some tears without judgement…

Or, all of the above.

Tonight’s highlight was baby girl bonding with her cousin. Although 11 years separates them, they found common ground today. And I discovered it, when baby girl went from –

Huh? Why wasn’t she bugging me anymore?

Because she found a viewing partner in her cousin. 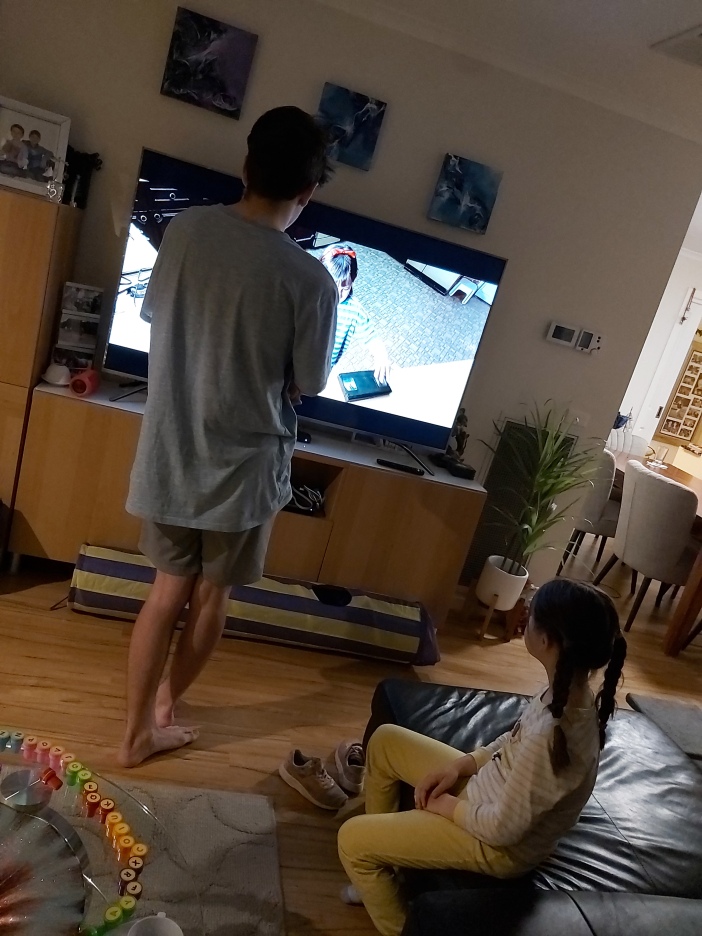 Matilda, the first real life-child geared film (as opposed to animated child film) that baby girl first watched at primary school and subsequently has become fascinated with, was the same movie my nephew faintly remembered from his childhood… and wanted to rediscover once again.

It was beautiful to watch them engrossed in the classic tale, dance to the music soundtrack and just be silly in the moment.

I got told off today by my Mum.

We try to be strong, try to be brave as we grow up. We try to do things on our own and not ask for help EVER… because we can do it all by ourselves.

That is a lie. Every now and then, you need help.

And that in turn reminds you, how little you are. How frail and helpless and childlike you can be.

Therefore, how little you know.

I was glad to get her mock-threatening scolding tone today. I didn’t realise how much I missed it… maybe I needed it, because it reminded me I was loved.

It helps to feel little sometimes.

But first I need to tell you about my hubbie, and tomato sauce… he drinks the stuff. He puts it on steak, chicken, rice, in sandwiches, hell, over any kind of ‘dry meal’… you name it, most likely he’s had it with the good ol’ dead horse.

Today at a family function, there was none of it. Hubbie had a full plate, and none of the food components had any of his most favourite accompaniment poured over it.

My brother even asked the wait staff. No, there was definitely none. A few minutes passed and he got up to ‘take a walk,’ his son coming along with him.

Several minutes later, they were back with big smiles. They sat down and my nephew produced a familiar bottle of red.

Not wine. The other red.

“Does anyone want some sauce?” he asked cheekily.

They had gone to the closest supermarket to buy a bottle of sauce for him!

Here the trio are totally incognito, the sauce startlingly clear (with my big red arrow!)

Hubble was able to have his food drowning in sauce, once again. 🙏🙌

They had a great laugh about it, but the true meaning was seriously there.

And so you can see, why this post is dedicated to my bro-in-law… and why he actually deserves the title of ‘brother.’

I looked at the hand resting on his leg. Glanced at his other hand, holding the steering wheel.

Both his wedding and engagements rings were missing.

And something else was in its place.

I think it speaks volumes for Hubbie that he has a better memory of this than I do, the giver of the rings… but that’s just what I did. Years and years ago when we were still ‘boyfriend girlfriend,’ I gave him a couple of rings.

They weren’t rings that I had bought specifically for him… they had been my rings. They had been wrapped around my fingers for years, and then one day, I decided I wanted him to have them.

I am honestly surprised I ever did this. More so because I am a hoarder and keep a lot (sorry Marie Kondo). I’m guessing I gave them away because he bought me rings to wear, from him…

I am also guessing, that I was feeling a lot of love when I gave him something that was so precious to me.

And when I look at those rings today, I feel it even more.

Because a while ago, he went out on a mission to find them. Back at his parents’ house, he found the two bands I gave him when we were still in our teens, and since that discovery has worn them on his fingers ever since.

One of them I think I recall buying myself. It is silver or something like that, and has about 6 hearts in a row, in a right-side up and upside-down pattern.

The other ring is possibly decagon shaped. It is super thin, also silver… and I think someone bought it for me. It may have been a cousin from overseas, but I’d be lying if I said that was the truth…

And he wears both, on his pinkie fingers.

I noticed it again today. We were in the car and I noticed that his $$$ wedding and engagement bands were gone… instead replaced with those old silver pieces that wouldn’t be worth much together, let alone on their own.

Those rings go back, to the beginning. ♥♥

He loves trees, and flowers, and all manner of plants and shrubbery, even grass… and is constantly trying to think up ways to pretty our yard, bring more colour and green leaves in, and also, when all that fails and he has no inspiration, he does the next best thing – he moves the pots around ;););)

He has been working along diligently on our front yard. Even on today, our day off together, he spent a good portion of it digging up grass and making a path along the fence for our new garden bed to go, making holes for new plants and the best part… giving them a positive welcome message as he puts them in the earth.

“Good luck!” He calls out as he pulls the wound-up and compacted plant roots from the plastic tub. “Hope you like it here.”

OMG. It is so darn cute. He does it with every plant. EVERY. ONE.

He is proud of his progress, and proud of what he is creating… and I couldn’t be prouder either. ♥♥♥♥

“This is the best play centre ever!”

They are great words to hear from your child, and as much as I adore them, they stem from her inherent positivity… she says stuff like that, A LOT.

The best song EVER for Valentine’s Day