A Saturday night in, but a loud, passionate and fun one with the best company.

It can get a little crazy.

It can get a little noisy.

And it can get a little rowdy, but that’s how things are when we combine, us with sis and bro-in-law, and best man and fam.

The kids will be running around the house at full speed, (and I don’t know how they don’t collect themselves on corners more often) flying past us adults gathered around the kitchen island, clicking glasses and listening to the latest tune selected that is blasting out of the portable speaker.

No really, it is. We were singing “That’s Amore” with booming voices, swaying to and fro and laughing at ourselves.

“When the world seems to shine

Gratitude of the day?

Sis and bro-in-law have a pool.

Oh, it’s not just the splashing and jumping and swimming with loved ones that is AWESOME.

(True, that is awesome enough all on its own).

But tonight most of us got over-excited and made paper planes to sail over the length of the pool against the night sky, to see whose would travel furthest.

I love our random nights together. In a year it won’t matter if we dont remember whose plane made it furthest.*

All that will matter is the memories. ❤

I think we’re pretty lucky to have water views, but today what we saw, was next level.

We were at my bro-in-law’s family’s house, and, like I said…

But it wasn’t just the views. It was the people. The company. The dogs! The food nom nom nom. The memories made…

And oh, the sunsets. 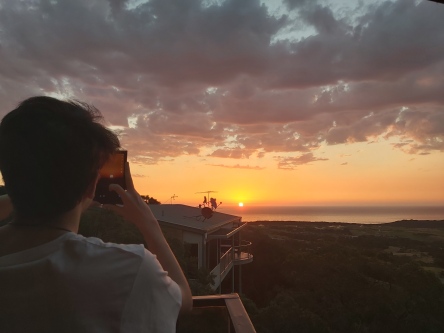 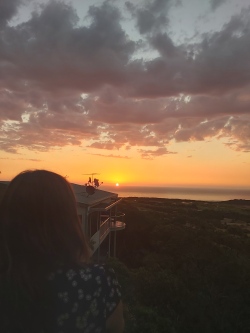 Taking sunset pics must run in the family, as I’m not even pictured above taking any!

What a perfect way to start our holidays. ❤🌅😍

So we got an upgrade today.

We got an upgrade, to a REAL piano.

Honestly I don’t know how this happened… how did this happen? In the most bizarre of ways, that’s how.

Sis recently got herself a piano, being fortunate enough to get it passed down to her… and just the other day she called and was like “I got you a piano.”

There seems to be musical keys hovering around her and our family lately. She was telling a friend about her recent good piano fortune, and lo and behold, that friend’s parents were also eager to get rid of the piano they have had for over 30 years.

I don’t get it. Is the key to getting something, being to not want something? Not as in ‘not want it,’ but as in –

Is that how we attract things to us?

I still don’t get it.

Nevertheless, as of today we have this 200 kg piece of 30 year-old furniture in our house… and a girl who is most definitely doing piano lessons now whether she likes it or not! 😉

Well it needs a new home doesn’t it.

Today we found ourselves in a place, a space, a set up, that we haven’t been in for a while… and yet it was something that we used to live and breathe.

And eat. As it was concerning the old kitchen table.

It was me, my sister, and my parents. And we sat down to eat in exactly the same spots we used to all those years ago. 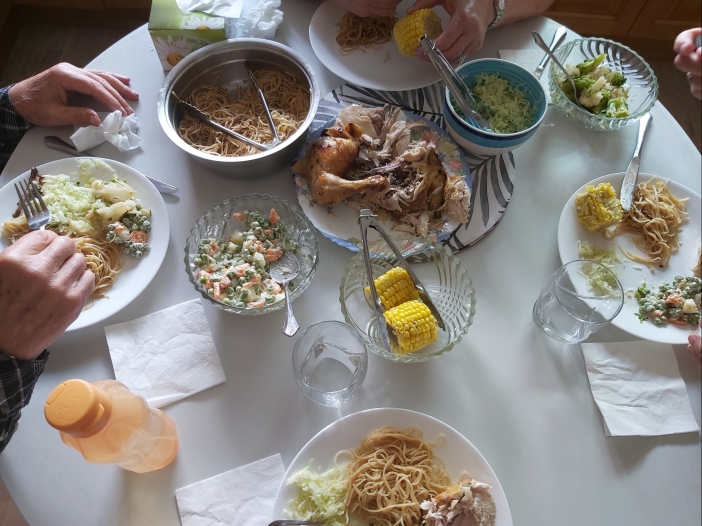 Wow. This is a big deal. We go to my parents’ house a fair bit, and even sis and I will find ourselves there at the same time too… but it will usually be with the rest of the fam. Hubbies. Kids. And we never sit at the small round table when there are 9 of us.

But today, only 4. The original clan;) I had to take a snapshot of the moment.

It wasn’t the only flashback in time though… When we were headed out later, sis and I in the back seat of Mum’s car as she drove, Dad in passenger… she stepped on the gas, HARD, as she flew down their long narrow drive.

Sis and I turned to each other with looks of surprise on our faces before I burst out laughing.

Oh Mum. How could I forget your insane driving?

But first I need to tell you about my hubbie, and tomato sauce… he drinks the stuff. He puts it on steak, chicken, rice, in sandwiches, hell, over any kind of ‘dry meal’… you name it, most likely he’s had it with the good ol’ dead horse.

Today at a family function, there was none of it. Hubbie had a full plate, and none of the food components had any of his most favourite accompaniment poured over it.

My brother even asked the wait staff. No, there was definitely none. A few minutes passed and he got up to ‘take a walk,’ his son coming along with him.

Several minutes later, they were back with big smiles. They sat down and my nephew produced a familiar bottle of red.

Not wine. The other red.

“Does anyone want some sauce?” he asked cheekily.

They had gone to the closest supermarket to buy a bottle of sauce for him!

Here the trio are totally incognito, the sauce startlingly clear (with my big red arrow!)

Hubble was able to have his food drowning in sauce, once again. 🙏🙌

They had a great laugh about it, but the true meaning was seriously there.

And so you can see, why this post is dedicated to my bro-in-law… and why he actually deserves the title of ‘brother.’

Today we were gifted with a beautiful instrument. 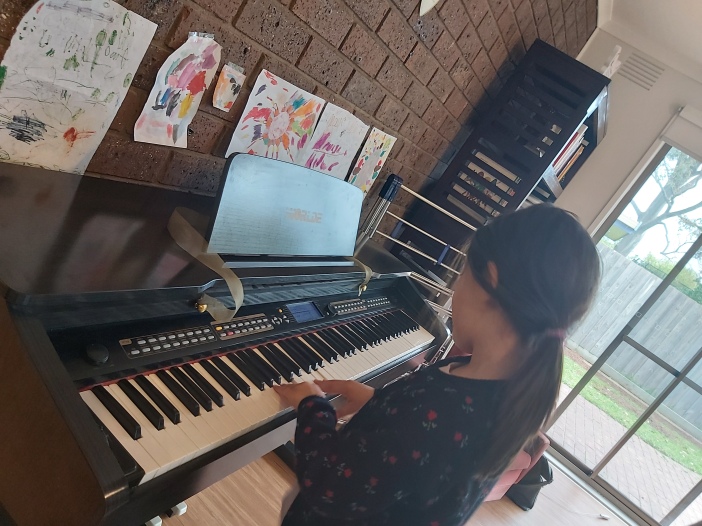 My sister and bro-in-law don’t need their piano keyboard anymore… they have another for their son. They kindly brought it over, set it up, and we proceeded to make music together.

It’s what we do BEST. It’s been a a while for the 4 of us to get together like this… but like we always roll, we roll best it seems when we’re spontaneous about it.

What else do you do when you make music?

Our best nights are spent like this. Hands down. ❤🎉🎹🎼